In the Cleland lab, we are developing superconducting quantum integrated circuits for applications in quantum computation and quantum simulation. These circuits rely centrally on the physics of the Josephson junction, implemented primarily in a variant of the transmon qubit. We have also done extensive experimentation using the Josephson phase qubit.

Josephson qubits have typical ground-excited state energy splittings in the few GHz range, with qubit control provided by external tuning of the qubit splitting as well as using controlled classical microwave signals at the splitting frequency. Qubits are coupled together using capacitive or inductive coupling elements, or via superconducting resonators (see below). Circuits are designed and built using standard semiconductor processing technology, and then tested at mK temperature using a dilution refrigerator.

Superconducting qubits are appealing for engineering quantum integrated circuits because of their intrinsically low loss, their relatively simple fabrication and ease of operation. Superconducting qubits now can achieve quite long coherence times, with both T1 and T2 in the tens of microseconds range, corresponding to a few hundred gate operations. We are continuing to develop better materials, processing, and circuit engineering to improve these basic figures of merit. We have built circuits comprising of up to nine coupled qubits; demonstrated the factoring the number 15 using Shor's algorithm; generating a five-qubit GHZ state; and shown a bit-flip error detection circuit.

Presently, we are focusing our research efforts on developing these devices for testing concepts in quantum communication in addition to quantum computing. 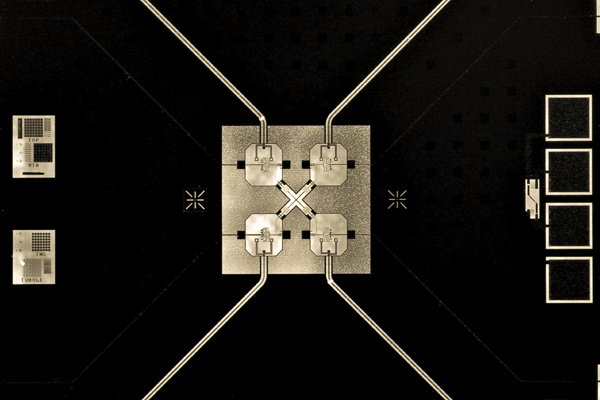 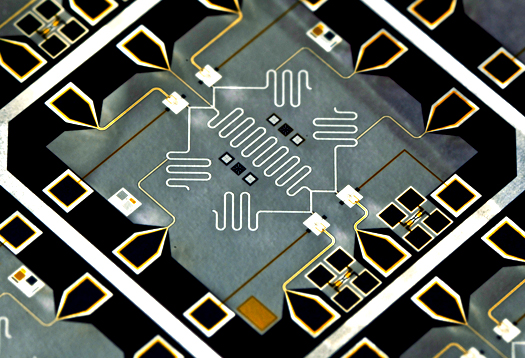 We have developed very high quality factor, superconducting electromagnetic resonators, for use as computational and memory elements for quantum information. With resonance frequencies in the 5-10 GHz band, we can achieve quality factors as high as a few times 106 at low temperatures and low excitation powers. The corresponding T1 energy relaxation times as long as 100 μs, with T2 phase coherence times just under twice this value.

In one experiment, we coupled an individual Josephson qubit to a resonator, and using a sequence of qubit preparation and tune-to-resonance protocols, demonstrated that we can pump photons one at a time, on demand, into the resonator. By subsequently measuring the resonator with the qubit, we have shown that the resulting Fock (photon number) states in the resonator have very high purity, with up to 20 photons stored in the resonator at one time.

By employing a protocol developed for ions interacting in a harmonic ion trap, we have extended our ability to generate Fock states in the resonator to being able to create arbitrary quantum superpositions of Fock states, creating states with e.g. zero, three and six photons simultaneously, with full quantum control over the relative amplitude and phase of each of the elements of the superposed state.

These resonators provide a robust quantum memory for quantum information processing, as well as allowing large on-off coupling when used as an intermediary between qubits.

We have developed mechanical resonators that allow us to cool a mechanical system to its quantum ground state. To date, the most success has been achieved using resonators based on the film bulk acoustic resonator (FBAR), a dilatational resonator fabricated from piezoelectric aluminum nitride. We can achieve dilatational resonance frequencies as high as 10 GHz, using the piezoelectric response to provide actuation and detection of the mechanical resonance. We have coupled these very high frequency mechanical resonators to a Josephson qubit and demonstrated quantum ground state operation, as well as the controlled generation and measurement of individual phonons in these devices.

We are now developing more complex versions of these devices, including integrated optical response in optomechanical devices, that can convert signals between microwave electrical and infrared optical frequencies. These are being implemented using high-performance optomechanical materials, with good optical properties in the 1550 nm telecommunications band and strong piezoelectric response to microwave excitations. The goal is to develop a quantum interface between a superconducting qubit and optical photons, with the goal of generating entangled infrared photons that carry quantum information entangled with the superconducting qubit state, or alternatively use optical photons to control a superconducting qubit circuit. 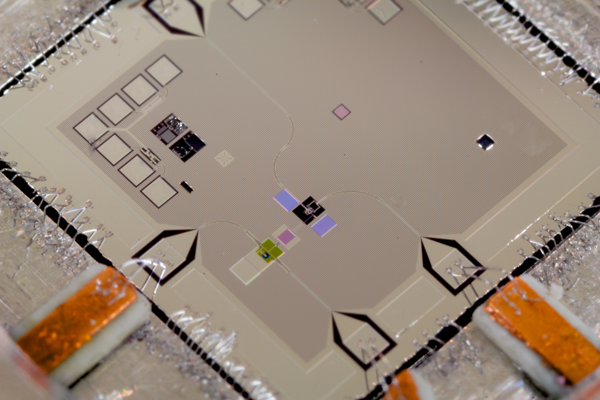 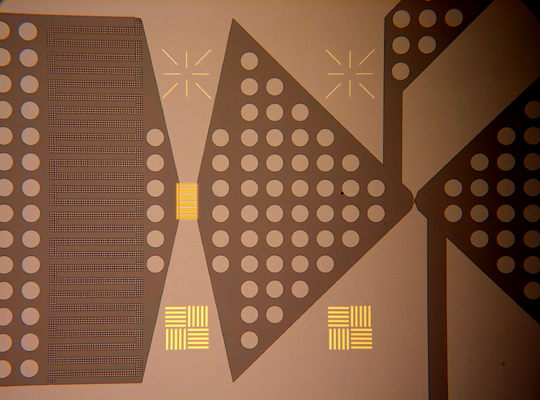 While not currently an area of active research in the Cleland group, we have developed an electronic sensing technology that allows the purely electronic detection of nanoparticles, microparticles and biological cells suspended in biologically-appropriate saline solutions. This relies on the use of nanolithographically patterned fluidic systems coupled with high-speed electronics, able to detect electrical impedance changes caused by the passage of small particles through the sensor volume. Using this intrinsically very high bandwidth technique, we can detect and count individual virus particles, cell fragments, cells (e.g. HeLa tumor cells) passing through a single sensor at rates up to 105 events per second. The sensors and associated microfluidic systems are simple and can easily be parallelized into arrays with tens to hundreds of parallel sensors.

This research effort has now been spun off into a startup company, Spectradyne, based in Torrance CA.